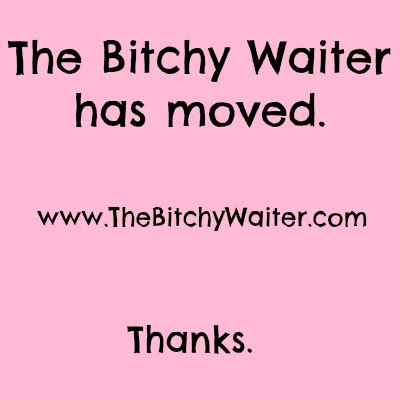 I have moved From now on, all new posts will be at The Bitchy Waiter at the new address. Please change your bookmarks and please also get me a vodka gimlet. 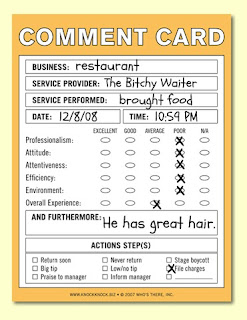 You know I love an opportunity to reach out to the readers and respond to comments. It fills my heart with pride to know that people take time out of their busy day of surfing Facebook and playing Words With Friends just to type out a comment to little ol' me. Last week someone let a comment slip out of their ass like a greasy Crisco fart. It plopped onto my computer screen and slid down leaving a trail of oil and bitterness. When I posted the photo below onto the Bitchy Waiter Facebook page, someone named Jarret had a thought.

"Weren't you a kid once? Did you not need help wiping your ass when you were young? How quickly one forgets that youth is a right of passage that everyone has to go through. It could be argued that, it's not the kids that are behaving badly, but it is you who is so jaded and misguided regarding children. Unless you were hatched from an egg or were born an adult, everything you are complaining about was once done by you. Try treating children and their parents with decency and respect and you might find that kids aren't really that bad. Do unto others as you would have done unto you..." 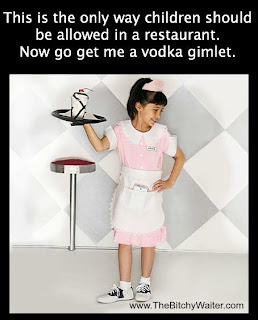 The truth is Jarret, it's a fucking joke. That picture of the little girl in the waitress outfit is not actually in a diner. It's a fucking Halloween costume. I didn't kidnap a child and force her to a photo studio so I could take a picture of her and degrade her with a demeaning caption. I want to dissect your comment and make sure I understand it:
Thank you for your comment, Jarret. I do appreciate it. And thank you for coming to a page that is all about bitching and then getting upset that people bitch. There may be a better Facebook page out there for you to enjoy. Might I suggest one about puppies or rainbows? Those are always so great. Except sometimes puppies need help wiping their asses and every once in a while a rainbow comes from an egg.

Take This Job (and a Fish Stick) and Shove It 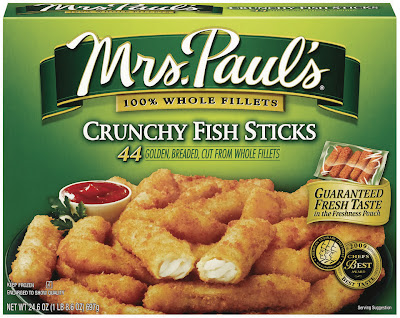 You know how people sometimes keep their feelings bottled up inside them and they never fully release all the frustration they feel? I do that. Believe it or not, this blog is just the tip of the bitchy iceberg of angst and fury that live deep within my hard-crusted soul. More often than not, I swallow emotions and assume that they will fade away into nothingness. It's a good plan, but it doesn't always work out. Every once in a while, all the pressure builds up and spews out like the volcano in episode #76 of The Brady Bunch, "Today I am a Freshman," when Peter makes a volcano for a science project and it erupts all over Marcia and an her friends. I erupted at work.

I have three jobs. Correction: I had three jobs. Thanks to my brutally honest opinion about the owner of the restaurant, I now only have two jobs. Some may say I quit while others will say I was fired. Suffice it to say, I no longer work there and people will be talking about my exit for years to come.

I walk into work and the first thing I notice is that all of the tables have been cleared and everything is in a pile on the bar; table tents, candles, comment cards, menus. There are no chairs at any of the tables as they have all been dragged to the back of the room. The tables are covered with dust and the floor has trash all over it.

"What the fuck happened here," I ask the hostess?

"What does that mean?" she asks.

"Are they coming back in to clean it up?"

"No, they're all gone. Mr. Vigoda told me to tell you thank you and that he owes you."

The only thing he owes me is the last three years of my life and I may be about to take his in exchange for it. I pull out my cell phone and scroll to my contacts and hit the one called ASSHOLE.

"This is Abe Vigoda, go." I hear the voice say on the other line.

"Umm, what happened to the restaurant, Abe?"

"Well, I guess it's cool for them, but the place is a wreck. Am I really the one who has to put this all back together? Ain't nobody got time for that."

Mr. Vigoda laughs. "I love that Sweet Brown video. Hey, maybe Fish Stick's video can go viral like that one did!"

The man is completely unaware how unfair it is that his no-talent son has left a huge mess for me to clean up as I make $5.00 an hour. I have hated Mr. Vigoda for too long and before my mouth knows what it is doing, I say:

"This is total bullshit. I don't work here so I clean up your fucking messes. I work for tips so unless Fish Stick is about to come back in here and leave me a huge fucking tip I am not cleaning this shit up. We open in an hour so if you want this place to be ready by then, I would suggest you get your ass back in here to do some opening side work because I quit. Go fuck yourself with a fishstick, asshole."

I hang up and the hostess stares at me.

"Did you really just tell Mr.Vigoda to go fuck himself with a fishstick?" she asks.

My cell phone rings and I look down to see ASSHOLE flashing on my screen. I press the button to ignore it. Thirty seconds later, the phone at the host stand rings and the hostess picks it up.

"Thank you for calling The Restaurant, this is Emily, how can I - Oh, hello, Mr. Vogoda. Ummmm, BW?" She looks at me and shrugs her shoulders. "Ummm, I think he's in the restroom."

I grab the phone out of her hand and yell into into it, "Go fuck yourself with a fishstick!" and then slam the phone down.

It is now definite that I have quit my job. Slowly, I walk over to the computer and punch out.

"Bye, Emily. Tell everyone I'm really sorry but I had to go."

The phone rings again and as I head to the door, I see Emily pick it up. I don't hear what she says because I have already let the door close behind me.

I quit my job in the most epic of ways. Thankfully, I still have two other jobs where I can always pick up extra shifts. I will miss the people I worked with but I will not miss the job itself. And I will most certainly not miss Mr. Vigoda. For the rest of my life, I will always imagine him with a box of Mrs. Paul's fish sticks and a big crunchy frozen fish fillet hanging out of his ass.