A Lady Walks Into a Bar Holding Two Grapefruits... 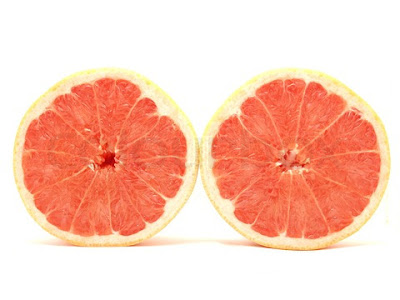 It takes all kinds to make this big blue marble that we call earth what it is. As a server, I am constantly surprised by what customers expect me to do. No, I will not run to the store to buy you Ranch dressing. No, I will not cut off the crusts of your child's sandwich. No, I will not do the Hokey Pokey for an extra five dollars. (Ten dollars, yes.) I suppose I should just stop being surprised because every time someone does something that I think can't be topped, someone comes in the next week and tops it.

A few weeks ago a lady came into the restaurant. She was carrying a plastic bag from the grocery store when she walked in and went straight to the manager/owner of the restaurant. She reached into her bag and pulled out two grapefruits and handed them to my boss. "Hi there. I'd like a Greyhound, but I want fresh-squeezed grapefruit juice. And will I have to pay the same amount since I brought in my own grapefruits?"

What the fuckity fuck fuck hell is that shit about? Who does that? Is she for real?

She was for real. My boss took the grapefruits and said we would do it. Of course I charged her the regular price because now the bartender has to actually slice grapefruits and find a squeezer to make the cocktail rather than just pour some perfectly fine grapefruit juice out of a can. I wondered what else the lady does in her life that is just as fucking stupid.

At a Macy's: Hi there, I have a yard of white cotton fabric here and I wonder if you could make me some new panties.
At a car lot: Hi there, I have this old tire I found in a ditch and I wonder if I could buy a car but only pay for three tires.
At an airport: Hi there, I need to fly to Florida but I brought my own map. Can I get a discount?
At a funeral home: Hi there, I'm not dead yet but I have this refrigerator box that I want to be buried in. Can you store it for me until I need it and then you won't have to charge my family for a casket?

On the bus: Hi there, I only want to pay half because I am carrying my bike so I could have ridden it to my destination for free.

She enjoyed her first custom fresh-squeezed Greyhound and I asked her if she wanted another since we had only used one grapefruit so far. She looked at the menu and told me she wanted to try something else. "Oh, maybe an Old Fashioned, that sounds good. Hmmm, well tell me what's the most popular." I hate when people do that. Order what you want, not what you think you should order.

"Well, the Sidecar is popular or the Cosmo. But the Old Fashioned is too, so whatever you think you'll like..."

"Okay, I'll have the Old Fashioned then!"

Three minutes later I handed her the drink. She looked at it oddly. "Well, this looks interesting. It looks like something that an old person would drink."

I looked at her senior citizen face. "Yeah, well..."

"Yes, ma'am. That's exactly what I was thinking. Do you need anything else?" This lady was weird with a capital Annoying.

The rest of her time in my station was uneventful. When I cleared her table, she had left her grocery bag on the booth seat. I picked it up and looked inside to find one single cucumber. I knew she would be disappointed to realize she had left It behind. It was either going to be her date later that night or she was on her way to a garden party the next morning.

Hi there. I want a cucumber sandwich. Will I have to pay the same amount since I brought in my own cucumber?

Posted by The Bitchy Waiter at 3:35 PM

This is so unbelievable and funny the same time.. I had once customer who brought his own food and asked for plate and silver wear so he can eat with his friends who were dining there,but he said he can't no longer afford to eat in restaurants...I just don't know what to think about people anymore..

Maybe she was thinking of having Hendricks Gin with cucumber garnish. Easily explained. (snort)

That cucumber was totally her date for the night. Hope she had a backup banana or something at home.

I SO admire you and your pleasant demeanor. If I was in your shoes, I would surely have a rap sheet a yard long. I have a very low threshold for stupidity.

"weird with a capital Annoying"...I love it! Maybe because I've served quite a few customers who also fit that description :)

Confessions from the Hairdresser said...

...or going to Hooters and asking for a discount on wings because you brought your own fine beautiful hot body?

"It was either going to be her date later that night or she was on her way to a garden party the next morning."

I would rather pay double to have someone squeeze grapefruit for me than drink the nasty canned stuff. However, I would have just ordered something else.

I worked at a high end resort once during the huge Atkins craze. They'd bring in their special Atkins bread and demand we use them instead.

Luckily the health code prohibited us from caving into their demands.

She is totally weird, but you handled it well. Im not a server but I stumbled across your blog like a year ago and you are a great writer. Keep goin

LOL that's such a fob thing to do!

I am going to have to say that this is actually kind of smart. I am allergic to gluten, but would still like to order a sandwich from my local deli. I never even thought about bringing my own rice bread. I won't, but if I had no shame, I would

On the bright side... she didn't pull the grapefruits out of her bra!

I have been tempted by the idea of trying to pick up some work as a waitress to supplement my day job. Thank you for the reminder - I suck as a waitress. I am totally incapable of keeping the "are you shitting me" look off of my face, which means the customer is thinking "no tip for you"

Cucumber? Oh, she probably was sad when she realized she meant to have you slice some for her water.
As for the bit about the priest's drink, I would've told her, "I don't know ma'am, I'm Baptist."

I started cracking up about the panty comment. Though seriously where do this people come from?

I just don't get people sometimes.

I've suggested products (a favorite vodka brand) before but then leave it at that. I've never brought my own of anything and insisted it be used. That wouldn't even occur to me!

In the words of Stephanie Tanner, "How rude!"

This happened to me with two 5lb bags of oranges for screwdrivers. Of course they were drunks so I hand squeezed every god forsaken Orange. And then there was the guy who brought in canned tuna for his pizza.