Excuse Me, Waiter? There's a Condom in My Soup 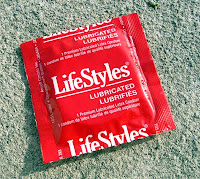 Has anyone else read about the lawsuit where the guy sued the restaurant because he found a condom in his soup? I wrote once about a table that found a fishtail in their brownie bottom pie but I must admit I think a condom is way way worse. You can read the article here but I will synopsize it for you. A man was at a Claim Jumper restaurant in California eating some French Onion soup when he started chewing on what he thought was an extra chewy piece of cheese. He spit it out and his wife was all, "If I had a dollar for every time you spit a condom outta your mouth, I'd have eleven dollars." Again, I am paraphrasing so she may not have said exactly that. Yes, there was a pecker poncho in his soup and he chewed on it. And I thought I was a bitchy waiter. The suit has been settled but neither the restaurant or the poor man who chewed on a love glove claimed liability. Normally, I would say it's the customers fault, but in this case I don't think so. If the man wanted to score some free food I think he would have just used the old "roach in the salad" bit or "broken glass in my ice" routine. More than likely, it was some asshole cook who wanted to fuck with the waiter. And to that cook, I say "kudos." This man really outdid himself in the true bitcheryness department.

I have never heard of this Claim Jumper place, but by looking at their menu it looks like your typical TGIF's or 99 or Applebee's. The main difference is that their French Onion soup comes with a love glove. Now I loves me some French Onion soup and my favorite part is when you get to chew on that melty provolone cheese that has been toasted in the oven. The next time I have it, I will be forced to evaluate it with my eagle eyes to ensure that no one is slipping me a gentleman’s jerkins up in there. And what about the waiter? What can you say when something like that happens? You're supposed to deny it?

Customer: There was a fucking condom in my soup.
Waiter: Sir, I am certain the soup did not have a condom in it because we have only have the utmost intentions to make your meal a high quality experience.
Customer: Well, here it is. Hangin' outta my mouth. How do you think it got there?
Waiter: Perhaps it is left over from last night, sir? I am not certain of your lifestyle and I don't want to judge you.
Customer: Are you saying that I put this in my mouth last night and I've had it there all day without noticing it?
Waiter: Again sir, I don't want to judge you. That's God's job, not mine.
Customer: Excuse me, but the soup came out with a fucking condom in it!
Waiter: That's impossible sir. Maybe it belongs to your wife. Ma'am, is it possible that this is your condom?
Wife: (long uncomfortable pause) What brand is it?

claim jumpers also has super huge fucking food. it's a restaurant for fatties and that's prolly why it MADE IT TO HIS MOUTH IN THE 1ST PLACE! how do you not notice something as big as a condom on a spoon? well, when you are a fatty, you shovel the food into your great, gaping maul. i bet he inhaled it and gagged himself.

Queen of the Rant said...

Your comments are hilarious! I am sorry but if someone told me that they had a condom in their soup I would of died from laughter. Although if the waiter did that he or she would of gotten sued as well just for laughing at the poor guy. I always search my food because I hate onions, I always order food that specifically does not have Onion included in the Ingredients. But Some How I always get a few Onions in it. SO I ALWAYS search my food so that I can fully enjoy my meal without having that mouth full of food ruined by the sneaky Onion Ninja..

Anyways I think it's safe to say that place will be closed down soon. I mean would you want to go to a place for dinner where you may or may not get a condom in it?

What a nauseating thought! I do believe as a result I may never again order french onion soup in a restaurant!

I love your multitude of terms for a condom, too. I had no idea there were that many, although I'm sure there are MANY more.

A flipping condom! OMG Id have died if that happened to someone around me. Probably would have upchucked if it had happened to me. Now how can the cook/waiter explain that when questioned?

When I do eat out I try to be extremely nice to the waiter and any other employees. Hell Im willing to toss them a tip that will make them do a happy dance just so they will remember me (i am located in a small town/city) that way no one will be tempted to fuck with my food. I always look at it carefully and pray it wont be seasoned with any human fluids or other icky crap.

Claim Jumper is insane - each portion is easily enough for a family of four. Absolutely nuts! And thanks for the giggle - have never read so many names for condoms in my life!

I would say Claim Jumper is less like TGIF's or Applebee's (I've never heard of 99) and more like Outback Steakhouse that's trying to be rugged American rather than rugged Australian. It's more western/BBQ themed and less campy than TGIF or Applebee's. It obviously doesn't matter for the story, but just in case you wanted to know...

Ummm...chewy ...and hopefully nicely flavored! ...Something tells me that wife or no wife, that little condom surprise was probably the closest our rubber chewer got to having sex in a while. I'm just guessing...
xo The Empress

Ugh. I once had a table order French onion soup that had a plastic lid in it.

And one of my friends had a table that found a cigarette butt in their rice pilaf. Classy.

I just discovered your blog yesterday. I'm catching up on some older stuff, and I just needed you to know:

it's not easy to make someone nearly pee their pants laughing, especially on some ranty, unedited blog rather than a well thought out, proofread, revised, and redesigned book.

Yet you have done this to me about a dozen times already. Thank you. You made my week.

In another post, you asked for suggestions. In my humble opinion: your hypothetical dialogue is a gem. Loved the McD's crazy bitch dialogue, and went crazy over this post. ("Long awkward pause...What brand is it?")

We smartasses like to smile to ourselves at the wit and evil charm with which we sting, but your particular brand of sarcasm could be bottled and shelved at Wal-Mart for consumption by the masses. More, please.

I think the waiter was the one who placed the condom on the soup.

Condom is used to control the number of population.
Condom

This particular papers fabulous, and My spouse and i enjoy each of the perform that you have placed into this. I’m sure that you will be making a really useful place. I has been additionally pleased. Good perform! ondom, bcs gai

When you use a genuine service, you will be able to provide instructions, share materials and choose the formatting style. https://shopvochong24h.com/bao-cao-su

Hope it was not used.