What I Did For Ricki Lake 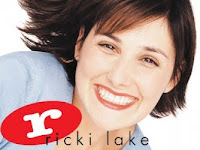 I have been called a fame whore. If that is what I am because I crave attention, fame, the spotlight, and more attention, then so be it. Have I always been this way? Yes. Yes, I have. Most actors are like that whether they will admit to it or not. Over the years, there have been many ways that I have tried to get my mug on the television, from submitting to reality shows (I was a semi-finalist for the very first Survivor, but they chose Richard Hatch instead) to writing to the ladies at The View and asking if the next time they do a dentistry makeover show, can I please come on and get some new choppers. But the first time I tried one of these methods was way back in the early 90's when I tried to get on The Ricki Lake Show with my friend Corinne.

At Houlihan's Corinne and I used to watch television and share breakfast together before the shift started. Egg and cheese on a roll from the deli downstairs. The same deli where I met Carol Channing. We saw that the talk show was looking for guests for a "My Co-worker Needs a Makeover" episode. Corinna and I hatched up a plan. We would submit her for a makeover because she wanted new clothes and I wanted to be on television. I called the show and left our story on their answering machine:

Ricki, my friend Corinne needs a makeover so bad. She always wears the same thing and she never wears make up or brushes her hair. She's a pretty girl, but she needs help. Ricki, whenever we go out after work, she wears her uniform and it's all covered with food and stains but she doesn't care. Ricki, my friend needs a makeover. Help!

We hung up and thought "whatever." A few days later a producer called us. This was in the days before cell phones so I dunno how they got in touch with me. I had an answering service back then or maybe a pager. It was so long ago they might have sent the message via Pony Express. But they wanted to meet us! That day. Could they come to the restaurant right then and interview us? Oh shit! I ran over to Corinne and told her that the Ricki Lake people were on the way and we needed her to look like she needed a makeover stat. Truth be told, Corinne is a very pretty girl. In no way did she need a makeover and she would never have gone out after work wearing her uniform, but this was The Ricki Lake Show. If the truth had to be bent a little, then we would bend it. We forgo seeing to our customers as we set out to get prepared for our interview. Corinne wiped off her makeup and wrinkled her uniform. She put her hair up in some ratty ass pile on top of her head and I think we put some honey mustard and other condiments on her clothes. They showed up about twenty minutes later. The producer was some chick who was about 25 years old and she had a big old Polaroid camera hanging around her neck. She interviewed us for about ten minutes as we continued to ignore the customers who were dying of thirst and starvation in our stations. This was television. Priorities, people. They snapped a picture of Corinne and said they would be getting back to us.

They never did. It must have been crystal clear that Corinne just wanted a new outfit from Chico's or TJ Max and I just wanted to be on television. She probably saw right away that Corinne didn't need a makeover and they moved on to the next batch of potential guests. We were crushed. As the week ended and we realized that our dream of meeting Ricki Lake was not going to happen, our lives slowly went back to normal. We kept watching The Ricki Lake Show each morning and sharing our egg and cheese on a roll, but it never quite tasted the same as it did before Ricki Lake reached out and dangled a brighter future in front of us. It's okay. Corinne and I will always have Houlihan's.

Awww I loved Rikki Lake! Especially in Mrs. Winterbourne...whatever don't judge. You could always father a whole buncha kids and try for Maury.

I once had a boss from hell who looked exactly like Rikki Lake. (Hairspray Rikki Lake). Someone said "You look like someone famous -- who is it?" and she said (with a perfectly straight face):

Uh - no. You do NOT look like Audrey Hepburn.

So I said "No- you look like Rikki Lake".

She got really mad at me.

I used to watch Rikki all the time.. and on a visit to NYC about 12 years ago got tickets to watch her show. It was an episode all about cheaters and featured some less than classy people. So it was a real departure from her normal stuff... ha.

But it was a blast!

When I was pregnant I watched The Business of Being Born (I think she's in that one) and it featured Ricki Lake giving birth in her bath tub.

What a cool story. At least you got that far anyway. How many were ignored from the get go.

Try Dr. Oz next. He's always looking for people for his show.

Haha! What an experience! Lol at customers dying of starvation and hunger! That's sad though- maybe if you guys had anticipated that the RL people would turn up all any time, you could've planned a bad look for Corrine in advance.

P.S: Even if you are an attention- seeking whore, you deserve every bit of that attention. Great blog!

I once quit a job to be an extra in a tv commercial for a local steak house. So I get where you are coming from.

I like Donda's idea. Except the trick is you have to sleep with really loose women so when they do get pregnant you have to do the DREADED DNA test. "And the test says Bitchy you are....." ::commercial break:: "....NOT the Father." And one of your hoes goes off and starts wailing on you.

Okay, not the BEST idea, but it could get you on TV.

Actually, it would work best if BW insisted he was the father of some Lebanese kids (you know since he is all pasty white n stuff) and get another actress with a gaggle of crumbs to go along with the big plan!! :) I see reality show. Maybe you can get Kate Gosselin...just a thought.

I once had producers begging me to go on the Sally Jessie show back in the day. They wanted me and a guy from one of their "looking for love" shows to meet each other for the first time live on their show. I ultimately opted out but perhaps something along those lines could work for you.

Great post. I was called for a reality show about dog training on ESPN. Got the conference call, and everything taken care of, down to the host/trainer of the show picking my dog for me... Was told that I was their old woman contestant and that, if I didn't hear back from them, they had to go with an Asian because reality shows have to have a mixture of all peoples, now... So, I got my own dog... (They also were very interested in how competitiave I was and would I be willing to show that on the show... I think I really lost them when I said I just wanted my piece of the pie, in life.) Thanks for sharing...

During a hellish half year of my life my husband and I lived with this physcho couple, with this idiotic idea of doing the whole rent to own house thing from this pervert of a landlord. He ended up screwing us over and our physcho housemates submitted the court crap to one of those court tv shows- I think it was the one with the black guy- Judge Mathias? or something like that. We were called and asked on the show. My husband and I declined- had a feeling people would see our housemates act crazy on tv and the next thing you'd know DR, Phil and Maury would be begging us on theres.- I still have mental scars from living with those crazy hippies.

@MommaX295 I saw that too and it cannot be unseen.

I worked for a really sleazy slumlord when I was in property management and one of his tenants wanted to settle a dispute on Judge Judy. I still wish he'd done it. The other woman that worked with me in the office and I really wanted everyone to see just how awful he was.

Also, I used to know someone who worked with booking for the Jerry Springer show. Sometimes she'd ask me, "Do you know anyone who ...?" and they'd be really bizarre things that, if I did know someone like that, I wouldn't be hanging around them.