How To Drink for Free For Four Hours 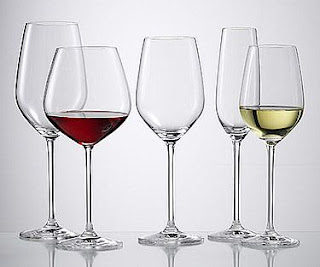 Yesterday a friend of mine scored a pair of tickets to the big fancy Food Network New York Food and Wine Festival. I heard that the tickets were $150 apiece so you know I was gonna go and see what the big deal was. The event we went to was a wine tasting that started at 1:00 and lasted for four glorious hours. When my friend was trying to decide who she could bring with her who would want to start drinking in the middle of the day, my name went to the top of the list. But I am not an alcoholic or anything. I knew I was gonna like this place as soon as they handed me a Waterford crystal wine glass attached to a strap that hung around my neck. These people really understood me.

The event was supposed to be for buyers and owners who would be sampling these fine wares for purchase. Since we were just plain old ordinary folks who wanted to drink as much as possible within four hours, we tried to act like we were important so no one would question our being there. "Hello, do you own a restaurant?" was asked to me dozens of times. My answer was always, "Oh, well I don't, but uh..." and then I would glance at my friend as if she was the one who was supposed to be there. Of course after about our fifth taste of wine, I no longer felt the need to carry on that charade because it was clear that we were not the only ones there who's goal was to get shitfaced. Plus the one time that my friend made it sound like she was there for an actual restaurant in Jersey City, of course the vendor was also from Jersey City and wanted to know which restaurant. "Fuck it," we decided. "Let's just drink."

There must have been 500 different bottles of wine to taste. Every station had a bucket for spitting after you swirled it around your pallet for a bit. All day, I only saw one woman use a bucket. Clearly, the bitch needs to learn how to swallow. Swallowing is better for all concerned. To my delight, wine was not the only thing to taste. I quite enjoyed tasting some coconut vodka, blueberry vodka, prosecco, champagne, Brut, beer, rum, tequila and some shit that was so delicious but I have no idea what it was. It was peppery and we took a shot of it with a strawberry chaser that was dipped in sugar and cayenne pepper. I really should have paid attention to all those business cards they gave me, but drunk me didn't care at the time. Sober me wishes he knew where to buy that wonderful beverage.

Since it was sponsored by The Food Network, there were lots of treats to eat as well; cupcakes, burgers, pasta, candy, cheese. I had my eyes peeled for Rachael Ray and Paula Deen because I really wanted to let them know what a fan I am and say hello, but they never turned up. And when I say "hello" I mean I wanted to ask Rachael why she's so damn cheap and ask Paula what it felt like to have that ham up against the side of her head. By the time 5:00 rolled around, I was bloated and done. I had definitely gotten my money's worth from my free ticket. I watched all the staff start to break down tables and drag trash bags out to the back and I felt like I should be helping them. Instead, I reached into my pocket for another piece of dark bittersweet chocolate and polished off my last taste of cabernet. I had officially "tasted" and I liked. If you can get your hands on some free tickets for that shit, you should really take advantage of it. You get to take the wine glass home with you even. A class act all around. And I didn't even throw up.

Posted by The Bitchy Waiter at 5:21 PM

Damn, lucky you!!. omg..Waterford glass??? for about 1/2 the price my girls and I went to the Monetecito SOS and came home w/wineglasses of the microbrewery...

That sounds Great!!! I just went to a food show in Tampa last week but tehy didn't have any alcohol dag nabit!

Was it Pepper Vodka? or something else peppery? Sorry for being anonymous but it is easier and quicker than signing in - Mauietta

I can only dream of such a perfect day...

Your day sounds like it was much better than mine. Free drinks and food, gotta like that.

Who spits the wine out?!?! That's pure insanity...

Sigh. makes me wish I still drank booze. I'd probably show up and they'd charge me $2.50 for a diet fucking coke.

Wow! You are my new personal hero! I am beyond envious of you.

I can't believe you didn't send us all samples of what you sampled!... We have a winery within two miles and they have an open house that I actually mark on my calendar!... good local stuff... But, the Food Network! I'm so jealous I'm going to have to pray for the next 100 years to atone... Glad you have a great time and thanks for sharing and letting me enjoy it vicariously... Come visit when you can...

Very cool!!
Sounds like a day made just for you!!
I'm happy to hear that you took full advantage of it!

And you didn't even call me? What's up with that girlfriend?

It sounds like a divine day in drinking and noshing heaven. Glad you enjoyed yourself!

I visited the Rocky Mountain Food & Wine Festival with my dad and sister in Edmonton, and it's lovely how we called this a 'daughter-daughter-father' bonding event, where we all proceeded to get nicely drunk. I then ask my dad, "So, are you okay?" He nodded and asked us the same question, to which we replied, "Hell no."

I think it is the sign of a great parent-child relationship when you can get completely piss drunk in front (and with the help) of your parents without any judgment whatsoever.

Too bad you couldn't have asked Rachael Ray if she could possibly be more annoying, as well.

She seems halfway hot, until she opens her mouth.

I moved from NJ, NY, CT to South Carolina and what they have here isn't even close to what a wine tasting up there is. Sounded like fun and free food to stop from getting sick was a great idea.

I lived in Boise Idaho for a year back in the 70's and it didn't have stuff like that back then Heather & Chris. haha