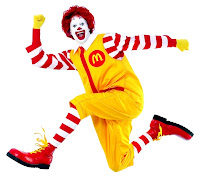 What is it with people who leave these nasty ass comments as Anonymous? Very rarely does someone leave a comment that is less than kind and then have the balls to sign their name. Even if they did sign their name, who fucking cares? What am I gonna do? Go to your blogspot profile and then send you an email? Oooh, scary. Check out what this anonymous douchebag wrote:

I don't tip and I'm American. I usually get the feeling from most waiters/waitress that they look at their customers as paychecks rather then people. If you don't make enough money being a server you can quit. I too once worked a minimum wage job and unfortunately for me, society didn't deem me worthy of tips. I worked at McDonalds by the way.

Hey Anonymous, you can read this post for a full explanation of why I keep my job. As for you, you never tip because you feel that "most" of your servers look at you as a paycheck? Guess what, asshat, that's what you are. And if you feel that most do, what about those few who don't? They don't get tipped either? I'm sorry that you had the misfortune of working in a McDonald's (it has an apostrophe by the way, idiot.) but you didn't get tips there because you weren't hired as a tipped employee. You made minimum wage, right? Waiters have a different minimum wage which is about $2.13 an hour depending on the state. If you consistently do not tip and you go into the same restaurant more than a few times, I can guarantee that the servers hate you. I can't verify that they would do anything to your food, but it is very possible. Not likely since most servers (myself excluded of course) are highly professional people who take pride in their jobs. But they definitely don't want you in their station. It goes something like this:

Waiter A: Oh shit, there's that guy who used to work at McDonald's.
Waiter B: Hey did you know that McDonald's has an apostrophe in it?
Waiter A: Of course I do. Only dumb ass ignorant assholes who used to work at one wouldn't know that. Duh. Anyway, it's your turn to serve this guy because I had him last time and he never tips.
Waiter B: I know, I hate him. He's always looking at me like I'm just this person that's supposed to bring him his food. He's creepy.
Waiter A: Yeah, I know. I wonder why he doesn't tip.
Waiter B: I dunno. Maybe he can't afford it. Oh well, I'll serve him and hope for the best. That's what we do, right?
Waiter A: Right. Don't be mean to him though and spit in his food or anything. I feel sorry for him. I mean, he used to work at McDonald's.
Waiter B: I would never spit in his food. That would be so immature of me and unprofessional. I'll ask a cook to do it.
Waiter A: Yeah, that's totally what I was thinking. Cool.

Posted by The Bitchy Waiter at 9:30 AM

Last Saturday, as I was weeding my organic foxglove bed, it struck me! Everyone needs to stop submitting to the processed-food mafia and get back to *real* nutrition. We should all go back to living in communes like they did in Sweden in the 70s!

Thank you for watching Gclub online

Thanks for sharing away Gclub

To the dumb-asses who spammed this blog:

"Go fuck yourselves to death."

I was chatting with the usher before a recent afternoon recital at the National Ballet and he made a great point. I mean, I'm not saying that I have never fallen foul of watching Big Brother, but come on, we've got to have some standards. But I guess that's just what happens when we let Saudi oil magnates rape our ecosystems and ruin the planet.
poker online
agen poker terpercaya
agen poker online
www.poker338.net


Hi. Thank you for the information you provided, these are impressive !! agen bandarq

I’m selfish, impatient and a little insecure. I make mistakes, I am out of control and at times hard to handle. But if you can’t handle me at my worst, then you sure as hell don’t deserve me at my best.

HP printer has several models with different features. It is based on advanced technology, yet there is a possibility that some technical glitches might occur while using it. In that case, you have the option of HP Printer Technical Support Number +1-870-345-4464 where you will be able to rectify the error by certified technicians.
HP Printer Customer Care Number
HP Printer Customer service Number

Welcome To Online Shopping Lucky Winner, ELIGIBILITY FOR PARTICIPATION, If you are an individual legal resident India and are 18 or older at the time of entry, you are

grandchildren), and our affiliates, advisors or advertising/promotion agencies (and their immediate family members) are not eligible to enter the Sweepstakes.

Welcome To Online Shopping Lucky Winner, ELIGIBILITY FOR PARTICIPATION, If you are an individual legal resident India and are 18 or older at the time of entry, you are

grandchildren), and our affiliates, advisors or advertising/promotion agencies (and their immediate family members) are not eligible to enter the Sweepstakes.

Welcome To Online Shopping Lucky Winner, ELIGIBILITY FOR PARTICIPATION, If you are an individual legal resident India and are 18 or older at the time of entry, you are eligible to enter the Sweepstakes. Our employees, their immediate family members (spouses, domestic partners, parents, grandparents, siblings, children and grandchildren), and our affiliates, advisors or advertising/promotion agencies (and their immediate family members) are not eligible to enter the Sweepstakes.

also visit and get alternative game links on my Asia website : Poker Online

Even though payout percentage is important, it's not the only thing you should look for when deciding on which online casino to play at.
idn play
It doesn't matter if the online casino payout percentages and game RTPs are really high at the site you're playing at if it takes ages to actually collect the winnings you're owed.
agen judi bola resmi
This is because it shows a good amount of respect for players and demonstrates that they know what they're doing.
game duit asli
It's no wonder that the casinos with the fastest payouts are usually the most popular.
betplace88
If you ever find yourself waiting ages and not getting the best payout speeds, then it might be time to make a move to other online gambling sites.
s128
That's because slow payouts are often an indicator that a company is struggling to make a profit and could possibly be facing financial difficulty.
daftar rolet
The best indicator of how likely you are to win is to look at the total a casino has paid out. If it's low, chances are you might not be onto a big winner.
joker777
The main impact is the banking method you use, as each one will have slightly different processing times.
s128 apk
We've listed the methods that offer the fastest processing times so that you can make a more informed decision when it comes to withdrawing your funds.
login idn poker
Making a withdrawal from an online casino is easy; especially as most casinos do all that they can to keep the process as fuss-free as possible.
idn poker
Choosing an online casino is a serious business and, with the vast volume of payout statistics floating around the web, there's no excuse for not doing your homework.